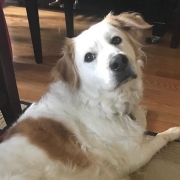 Hi, friends! Today I’m going to tell you about this disease that my mom says I have, called “Cranial Cruciate Ligament Disease.” Don’t worry – it sounds worse than it is! But, it does hurt sometimes, which is why I had to have surgery to fix it. I’ll tell you more about how it went, my physical therapy exercises, and more in my next blog!

Why Am I Limping?

My mom first noticed that I was limping in January of 2018. After just one week of acupuncture, my limping decreased and appeared to be stable. On the outside, it looked like a muscle injury, but, since my mom is a vet, she knows that partial cruciate tears (I’ll explain this more, later) can be difficult to identify without sedating and evaluating further. She wasn’t convinced that I was better, and she was right!

7 months later, I started limping on the same leg, and it did not get better as quickly. My mom brought me to Port City Veterinary for a referral with Dr. Bliss, who said that it was likely that I had this disease – Cranial Cruciate Ligament Disease. This disease has a long name, so I’ve decided that we’ll call it CrCLD from now on.

About the Cranial Cruciate Ligament (CrCL)

The 2-legged human equivalent of this ligament is called the Anterior Cruciate Ligament (Another long name! Let’s call it the ACL). You’ve probably heard of humans tearing their ACL, and that it doesn’t feel good! That’s because this ligament is a really important one! For 4-legged animals like me, this is one of the most important “stabilizers” inside our back leg knee joints, but my mom says for dogs, this joint is called the “stifle” joint.

I’m told that the CrCL has an important job, which is to prevent forward movement to the tibia (shin), relative to the femur (thigh). When the CrCL is ruptured, the stability of the joint is lost, which means that the tibia can now move forward relative to the femur. I don’t know what all of this means, but I do know that this is not good! This is why my legs hurt sometimes.

Here is a picture of what my knee (stifle) looks like underneath all my fur. The left image is what my knee should look like, but the image on the right is what it actually looks like. 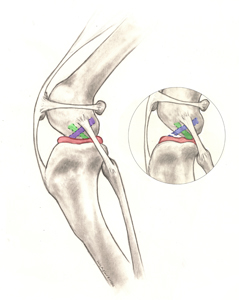 My mom says that a ruptured CrCL is one of the most common reasons for hind limb lameness, pain, and knee arthritis. She gave me a long list of things that can cause this to happen. One of these, a few of these, or all of them combined can lead to the disease:

My mom says it isn’t likely that I woke up one day with the disease. It probably happened over a few months, or maybe even over a few years.

T.P.L.O. (I like to shorten names if you haven’t figured this out by now!) is a procedure that helps to prevent forward movement to the tibia. It does this by changing the angle of the top of the tibia, which is called the “tibial plateau.” (I know I’m using a lot of big words today! If you have any questions, give my mom a shout!)

I’m told there are other ways to treat CrCLD, but that this was the best option for me. I’m very active – I love hiking, running, walking, and swimming, and I weigh around 45 pounds. If I were overweight or not active, then a smaller, different type of surgery might have been a better option. If you have questions about different types of surgeries to treat this disease, just ask my mom!

I was supposed to have surgery in December of 2018, so my mom started rehab therapy with me to help keep my muscle strength in that leg, and also to help with the pain. She says that muscle mass can decrease quickly – sometimes an inch or more in less than a month after an injury!

After a month of rehab therapy, my family saw how well I was doing with rehab and that my pain level was controlled, so they postponed the surgery until the ice and snow were gone. They were worried about me slipping out on the ice and hurting myself after surgery, so they rescheduled the surgery for April.

We made sure my 2 legged brothers and sisters understood the different things they had to do when it came to walking me or letting me out to go to the bathroom. They called it “setting up boundaries.”

One day, I overheard my dad telling my mom how worried he was that I wouldn’t be the same after surgery. I overheard, and it scared me a little, especially since I knew my surgery was happening in a few months. But my mom said she has seen dogs go through this surgery before. She said that many dogs walk better than they did before surgery just a couple of weeks after surgery.

She also said that with rehab it will happen even faster for me and that I’ll have an easier recovery. That made me feel a lot better.

I think my family learned a lot about me during this boring waiting time, so now they are better prepared to take care of me after my surgery. I am now out of surgery and undergoing rehab therapy. Stay tuned for photos, videos, and more updates about my rehab and life after the surgery!

P.S. Although my mom knows a lot about this surgery and has recommended it to many, it was different for her to go through it personally. She now has more tips for owners who are going through and wants to share them with anyone who might need them. Fill out the form below to get access to Dr. Wilson’s tips! 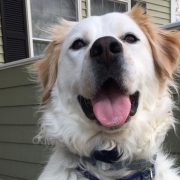 Hi there! Let me introduce myself; my name is Jenkins. I live in my forever home – Acupetvet’s home – after being in a shelter for over a year. But that’s a long story…for another blog! I’ve had a history of being a “nervous Nellie” as some of my 2-legged friends call me. I have not met this Nellie person yet, but she must be really loved, ‘cause I sure am.

My family feeds me, plays with me, and has even given me a companion named Hazel, who has taught me how to do things I’m not supposed to and get away with it! She’s my soul mate! 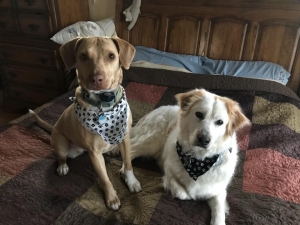 Here we are, just being cute. 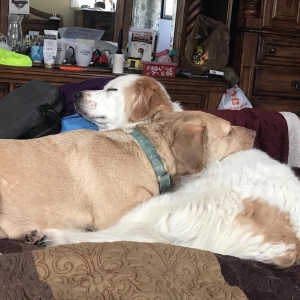 And here we are cuddling on a sunny afternoon. 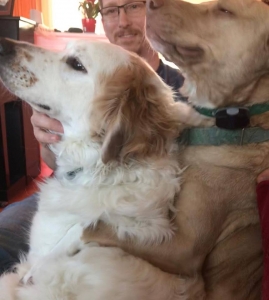 And here is Hazel, giving me a hug hello!

I am very thankful I have something I can do now on these blustery cold days! I get so bored being cooped up in the house when it is below zero outside. Acupetvet has told me that if her ears are cold, my nose must be, too, and that I could get bitten by a bug called “Frost?” I heard they are worse than fleas. So, I come right in when my mom calls me.

Speaking of my mom; she knows I’m bored sometimes, so she thought I should keep busy and start to write a blog. I honestly think this is her way of making me work. After several episodes of vomiting and diagnostics to rule out foreign bodies these past few months, I think my mom is making me earn my keep. I can’t help it that I like to eat things that most of you won’t even point your nose towards. I’m just so curious.

So anyway, I am now the newest employee of Acupetvet and the only 4-legged one at that. Meet Jenkins, (bowing with a top hat) at your service!

Being a Vet’s Pet

But, seriously, since I am a veterinarian’s dog, I do have a lot of perks, like learning all there is to know about what not to eat – apparently, curtains should not be on the daily menu, though I’m still not sure why not. I also get to test which type of flea preventions taste good, and which ones definitely don’t, which is not as much fun for me. But, I also get to try out different toys and meet all kinds of 2-legged and 4-legged friends.

My favorite part of being a veterinarian’s pet is getting free acupuncture and laser treatments, and I can tell you all about it. I will also take you on my 4-legged adventures and show you what it is like being a 4-legged human…

P.S. Stay tuned for more blogs. I’ve been tasked with keeping my mom’s readers entertained and educated, so I’ll be doing just that. You can also check out the Acupetvet Facebook page, and send us messages about anything you want to learn more about. My mom has me responding to messages on there as well, and I love it!

Do you have a pet that would benefit from my mom’s services? Schedule an appointment with Dr. Wilson!